Toyota has readied 2016 Toyota Hilux Vigo All New Thailand Hilux, This 8th Generation 2016 New Toyota Hilux is being tested n in Thailand, Europe and Australia. On the left is a picture of all new 2016 Toyota Hilux in production in a Toyota factory in Thailand. The long awaited Toyota new Hilux 2016 2015 is a major change facelift shape change model and is expected in 2015. 2016 Toyota Hilux Vigo Champ may lose its Champ moniker and a new moniker will be added. You have the pictures, release date will soon be announed, spec sheets of new 2016 Hilux 2017 will be available here soon thereafter. 2016 Fortuner Major Change Model will be released right after the Major Change 2016 Hilux. 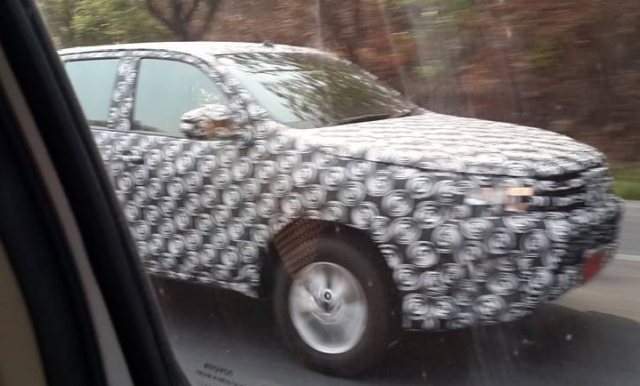 Here is a spyshot of the next gen Hilux on roads of Thailand and vehicles are only road tested when their release is only a few months away. Spyshots have emerged, the question of when its release date is very relevant. Specifications of this next generation 2016 New Toyota Hilux will be on these pages soon enough.

World's best selling diesel pickup Toyota Hilux plans to keep its crown with this spacious, versatile and modern facelifit Hilux. Whole front will get a facelift. There will be tonds of improvements in the inside of the vehicle as well. In addition to the 2500 cc diesel and 3000 cc diesel, All New 2016 Hilux will also be offered in 4000 cc Petrol V6 engine as well. Some are hoping that Toyota will also release a hybrid Hilux but this is not confirmed. Perhaps it will release them in Europe but not in Thailand. In Thailand it may release CNG version which is green but not quite hybrid.

Upright slanting grill, sharp headlamps and larger fog light will add to its distinctive look of 2016 Major Change Toyota Hilux Vigo. Toyota Hilux cabin has always been about comfort and more luxury features will make it an even more luxurious ride. It also borrows some features from Toyota Kluger. It will remain easier to drive and will have even more off-road capabilities and will become more spacious.

Toyota has seen all the recent changes made in 2016 Ford Ranger especially in Wildtrak model and 2016 Mazda BT-50, 2016 Nissan Navara NP-300 and 2016 Isuzu Dmax. It is expected that it has kept all these new trucks in mind when creating the 2016 Next Generation Hilux. 2016 Mitsubishi L200 Triton is also expected soon.

2014 Toyota Hilux Next Generation  Minor Change model is available now at Jim Autos. Now Major Change is expected to be released in late 2014 as 2016 Major Change Model. Toyota Hilux Vigo remains world's best selling pickup truck so Toyota can chose to play it safe in 2014 and only released a minor change model. 2016 Next Model will by all accounts be a major change new model which will completely overhaul Toyota Hilux's interiors and exteriors and will give it a fresh new look. Aerodynamics will be helped by bold lines along the body.

2014 Toyota Hilux Vigo Champ is a wonderful machine available at a discounted price so email now at This email address is being protected from spambots. You need JavaScript enabled to view it. to get your 2014 Toyota Vigo in Right Hand Drive or Left hand Drive or to to sign up for updates on 2016 Hilux Vigo. If you need a quality pickup truck now, don't wait for the new model as Toyota is likely to rasise its price and discounts will also disappear for the first year at least.

Toyota Australia, Toyota Japan and Toyota Thailand are working together to create this full change model so one can expect a lot of wonderful technology. New shape New 2016 Toyota Hilux complete makeover is going to be as big a game changer as introduction of 2005 Toyota Hilux Vigo in late 2004. Spy Shots of New Toyota Hilux 2016 are in now and New Toyota Fortuner 2016 will be on this site soon.

This time around Toyota is making a big push to involve as many of its R&D teams as it can. More importantly engineers of Toyota Australia are playing an important role in design of 2016 Toyota Hilux.  Next Model Toyota Hilux 2016 Spy Shots and Next Model Toyota Fortuner 2014 2016 Spyshots of Hilux 2016 will be available as soon as available. Review of new 2014 Minor Change Toyota Hilux Vigo is available now in this site and 2016 Major Change Toyota Hilux Vigo will also be available on our site. It is expected that all versions of Hilux: Hilux Vigo, Hilux Invincible, Hilux SR and Hilux SR5 will experience this facelift. It is not known if the name Toyota Hilux Vigo Champ will still be with us. Vigo Champ designation was not particularly popular with the customers so perhaps they will retire it in favour of a new designation. Stay tuned!

Even though Release Date and Price of New Hilux 2016 is a closely guarded secret, the consensus is that New Shape Toyota Hilux Vigo Major Change 2016 model is likely to be revealed in December of 2014 and released in February. New Design 2016 Toyota Fortuner will be released simultaneously. If you want Hilux, now the new 2014 Toyota Hilux and 2013 2012 2011 2010 2009 2008 2007 2006 and 2005 Toyota Hilux are always on sale so whether you are looking for Toyota Hilux 4x4 or Toyota Hilux 4x2 it is still world's best selling Pickup Truck in its class. RHD Toyota Hilux Vigo and LHD Toyota Vigo Hilux are both available now.

So far Toyota Hilux Vigo was built on IMV and early development of Hilux 2016 Major Change Model has been on IMV-II platform. Now that Toyota has released its new Toyota New Global Architecture (TNGA) Platform, Hilux will also benefit from this standardization across Toyota's product lines. All major manufacturers are now standardizing on a common platform, all future Volkswagen will be built on MQB platform and Nissan on V-platform

Toyota is hoping that you will fall in love all over again with all the changes it is planning for the aging Hilux. Some changes expected in New Model New Shape 2016 Major Change Toyota Hilux are as follows: